The House of Special Purpose

One hundred years ago today, on July 17 1918, the deposed tsar, Nikolai II, was murdered, along with his wife, his son and his daughters, at the 'House of Special Purpose' in Yekaterinburg, Russia. In my novel The Last Rite, our hero, Mihail Konstantivich Danilov meets Nikolai earlier that year, and has a vision, through the tsar's own eyes, of his approaching fate.

Instantly I was in a different place. A narrow stairway leading down to a cellar. It was night – the early hours. In my arms I was carrying a boy. He was thirteen years old, but small for his age, weak, ill. There was a queue of us on the stairs, but soon we were in the cellar. There wasn’t much room, not for eleven of us. I looked at the faces around me. My wife was there, and my four daughters. The four others were the only ones who had remained loyal to us; my physician, a footman, a maid and a cook. Around my ankles scampered my little spaniel, Joy. She had remained loyal too. I turned round, back towards the stairs. They’d said we were being evacuated. Evidently we would have to wait here some time.
‘Could you bring some chairs?’ I asked.
The man standing at the bottom of the stairs, our gaoler, shouted up. Moments later three hard wooden chairs were brought down. I placed my fragile son in one and offered the second to my wife. I took the third. Then the room began to fill, with more men coming down the stairs. Soon the little cellar was preposterously crowded. I had to stand up again, just to see what was going on. There were eleven of them, not counting our gaoler, the same number as there were of us. That in itself was suspicious. They tried to spread themselves through the room, each pairing off with a single member of my family or our entourage, as if fulfilling the promise made on some fantastical dance card. But in the cramped space it was impossible to move anywhere.
The gaoler cleared his throat. He had a piece of paper in his hand which he read from.
‘In view of the fact that your relatives are continuing their attack on Soviet Russia, the Ural Executive Committee has decided to execute you.’
I turned quickly to look at my family. ‘What?’ I whispered. ‘What?’
The gaoler repeated the sentence, reading it again, though it was short enough for him to remember by heart. I wondered where they would take us to perform the act, how much time we had, whether they would separate us – the men from the women, the adults from the children. I began to pray that in the coming hours we would have time properly to say goodbye.
But the gaoler had scarcely finished speaking when his hand emerged from his pocket holding a revolver. He was standing just two feet away from me. He fired and I felt a thump against my chest. My legs grew weak and I began to fall. The gaoler fired again, but not at me. I heard my little boy scream and then fall silent. Until then I had felt no pain, but now every agony shot through me. I could not move, I could not speak, I could only perceive, and I knew that that would not last more than a few moments.
The other assassins had rifles rather than pistols and they began to fire. Bullets ricocheted across the cellar. Bodies fell – I could not see who – and the monsters finished them off with bayonets. I tried to breath, but could not. Nor did I want to. My heart had been still for seconds now, blown apart by the bullet. My eyes gazed out across the cellar floor, across the pools of blood to where the spaniel pawed at the dead face of my beloved son. I tried to reach out to him but I knew there was no point. My only consolation was that we had died in the same moment. 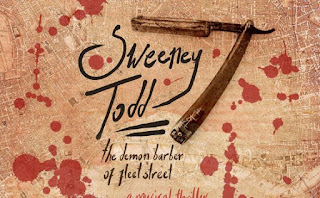 Aficionados of this weblog may note a couple of disturbing trends: the only books I seem to review are about Jack the Ripper and the only shows are productions of Sweeney Todd.

Perhaps this reflects something of my macabre predilections, but the basic reason is that I only like to review subjects that I really know something about, and I’ve seen sufficient productions of Sweeney Todd to make even professional stick-shakers back away in fear.

There have been big productions of Sweeney Todd and small ones, and director Conor Baum’s interpretation is definitely at the small end of the scale, with just eight actors covering all the roles and the work of the chorus. Productions of this size can flounder, but Baum exploits the limitations entirely to his advantage. The small, claustrophobic space at 88 London Road is perfect for the gothic atmosphere and is used flawlessly to convey the variety of scenes visited as the story progresses, whilst maintaining its centre of Todd’s tonsorial parlour glowering above Mrs Lovett’s pie shop down below. 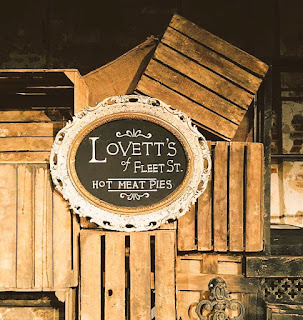 The mechanics of that set are vital to any production of Sweeney. It needs to work for Pirelli’s semiconscious body in the trunk, his hand reaching out and grasping; for delivering Todd’s victims down from his chair; for those victims to arrive in the cellar below. And on top of that we need a convincing bake-oven to boot. For any production that does not have an infinite budget, these can be a sticking point. Some ignore the problems; others bodge the solutions. Here, Cath Prenton’s set combined with some clever direction worked excellently, showing those things that could be achieved on stage and smoothly allowing our imaginations to fill in what couldn’t.

The cast did astonishing work in covering their own main roles plus countless minor parts. All sang wonderfully, though some seemed to get into the skin of their character a little better when singing than when speaking. Clear exceptions to that would be Alice Redmond (Mrs Lovett), Samuel Clifford (Beadle Bamford) and Alistair Higgins (Tobias), all of whom gave entirely convincing performances throughout. Indeed, Higgins was one of the best Tobys I’ve seen, avoiding the pitfall of being too sweet and just a bit too ‘musical theatre’. Anthony is always a difficult role to cast, and while Dale Adams sang it wonderfully, his presence on stage was more than a little too graceful to fit in with the grittiness of the rest of the cast. A bold but effective decision was made to cast Rebecca Bowden as both the beggar woman and Adolfo Pirelli. Pirelli requires a high tenor voice which is sometimes rewritten or simply fluffed. It was wonderful to hear Bowden hitting those notes clearly and beautifully – a full octave higher than the score.

Like the cast, the orchestra was similarly pared down to just three: cello, keyboard and piano, from which musical director Ellen Campbell conducted. At times this led, understandably, to a few gaps in comparison with the Broadway recording with which many in the audience will be familiar, but at others it was fascinating to hear individual musical lines that are often lost in the hubbub. The same was true of the choral numbers performed by just eight voices. Here nothing was lost (except perhaps the occasional oomph of a choir of sixty emitting a forte fortissimo ‘Swing your razor wide, Sweeney!’) and everything was gained. Each vocal line was clear and could be appreciated either on its own or as part of the overall harmony. As anyone who has sung them will know, these choral numbers are fiendishly tricky, and without exception the cast performed them brilliantly, in many cases with only a single voice on each line. As far as I could tell the score was complete with the exception of the tooth pulling (which is commonly cut) and The Tower of Bray, which I have to say I’d have liked to hear.

For any show as well-known as Sweeney cast and director must be working constantly to keep things interesting for an audience who for the most part know exactly what is coming next. Here there were always subtle and interesting things going on, such as the changing newspaper headlines for each scene and indeed the whole setting of the story as being some kind of newspaper report. And it’s always a treat to hear a new joke in a familiar text, in this case from Alice Redmond – prima inter pares of a hugely talented cast – during By the Sea with ‘I’ll be there slipping off your [pause] slippers.’ It may have been done before, but it was new to me.

I’d always recommend to someone who’s never seen Sweeney to go and see almost any production, including this one. The stronger recommendation is to those who have seen the show before – and Brighton’s full of them. This production really will add something to your appreciation of the show. And the good thing is it runs till the end of the month.