Twelve has been included in Transworld's Book Group Reading Challenge. Choose any four books (that's to sayTwelve plus any other three) from the list of fifteen and be sent copies to review on Amazon or on your own blog.

Full details here.
Posted by Jasper Kent at 13:00 No comments:

The anthology will be published at the end of September in time for the British Fantasy Convention in Brighton, and a fee copy will be given to all BFS members.

A full list of contributing authors and ordering details for non-members are available. A Brief description of the story Ben can be found here.
Posted by Jasper Kent at 09:54 No comments:

In preparation for the publication of The Third Section, I've done a major overhaul of my website.
Experience the new look at www.jasperkent.com.
Posted by Jasper Kent at 12:30 No comments: 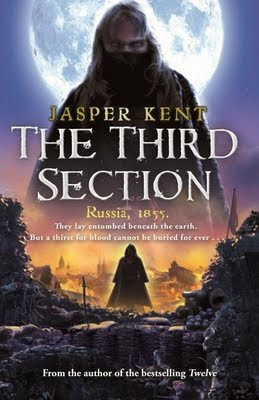 Here's the cover of The Third Section, the next instalment of The Danilov Quintet.
It's published in the UK by Bantam on August 18th and in the USA by Pyr on October 25th.
Artwork is again by the wonderful Paul Young.
Posted by Jasper Kent at 09:30 No comments:

Nun of Thee Above

UPDATE: FOR REASONS THAT YOU'LL SEE IF YOU READ THE COMMENTS SECTION, THIS WHOLE IDEA TURNS OUT TO BE A BIG PILE OF DOGGY-DO. MY APOLOGIES. I LEAVE THE POST UP ONLY AS A MEMENTO OF MY STUPIDITY.
The proponents of AV claim (and I hope that if you've been following these pages, you'll accept the claim is false) that AV guarantees that the winner has the support of more than 50% of those who voted. Even in those cases that the claim is true, it's still just a quirk of the fact that if a candidate doesn't get 50%, then they are repeatedly given additional votes until they do.
But if we really wanted all MPs to have more than 50% of the vote, even under First Past the Post, it would be quite simple:
If a constituency gives no candidate 50% support, then that constituency doesn't return an MP.
(Note that this approach wouldn't work under AV, since at least one candidate always gets more than 50%.)
It's a radical approach, but it has its pros and cons. The main pro is that it is something that would really encourage candidates to seek a broad base of support. The con is that it would leave many (perhaps most) constituencies unrepresented.
Under FPTP, and under AV, we do have a mechanism to indicate that we don't want any of the candidates to represent us at Westminster - we don't vote. At the last general election, 35% of the UK took that option, more than the fraction who voted for many of the winning candidates.
The problem is, there's more than one reason for abstention. It may be to wish a plague on all their houses, or it may be because we couldn't be bothered, or were away on business, or whatever. We can demonstrate that we really do care enough to go to the polling station, by turning up and then spoiling our paper, but even then there is no way to distinguish between the conscientious abstainer and those can't tell the sharp end of the pencil from the blunt one.
What we need is a genuine box in which to put our cross, labelled NOTA - None Of The Above.
Would it have much effect? Perhaps not.
Under FPTP, the NOTA votes would be counted and would certainly be of interest if NOTA came in third or second or even (dare we hope?) first place. But it wouldn't actually make any difference.
Under AV, NOTA would have less impact. The winning candidate would still get over 50% (it can't be avoided). If a voter put NOTA as their first choice, and then listed the other candidates, then they would be saying, 'I don't want any of these candidates, but if I have to have one of them, here's my order of preference.' Well, the fact is you do have to have one of them, and so your NOTA vote would instantly be dismissed and the process would carry on as normal with your second-choice vote being counted.
But what if, as suggested above, you could have none of them? What if, under FPTP or AV, NOTA was counted like any other candidate and could win. It would be rare I think, but it's an option that would allow voters to truly express themselves. Under FPTP things would be, inevitably, simple. If NOTA gets more than any other candidate then NOTA wins and the constituency returns no MP.
Under AV things are (inevitably) more interesting. The NOTA selection could go anywhere in the list that the voter chooses - top, bottom, or middle. And suppose you list the candidates in the order A, B, C, NOTA, D, E , F. That would be saying, 'I'm happy to have A or B or C as my MP, and of them, here's my order of preference. I don't want any of D, E, F, but if it comes to it, I do still have a order of dislike.'
That's really quite expressive. Under standard AV, however much you loathe and despise candidate F, you still have to list them to get the most of you vote, you put them last, seemingly suggesting that you would like them to be your MP, just that you'd like others more. By putting that NOTA break in there, you're effectively producing one list of candidates you like and another of candidates you don't, and putting the BNP (sorry, candidate F) at the top of that list. (It has to be said that this is a point of perception, not something that directly effects the result, but perception is important.)
There's still one problem, however. In a constituency where NOTA wins, the people don't get a representative in Parliament. The best I can come up with is that the runner-up gets forced to go to Westminster, but doesn't get a salary. I can see the fairness of it, but I can also see how it might produce an MP who slightly less than enthusiastic about their job - which was really the whole motivation for electoral reform.
But that's a detail. The important thing is to modify AV by adding this NOTA option. So who's with me? Who will make their voice heard? Who will climb up onto the roof tops and shout out the slogan to all who will listen:
'Vote NOTA-AV!'
Posted by Jasper Kent at 08:56 26 comments:

(Sorry to go on about it, but I'm just fascinated by mathematics.)
One of the headline reasons being put forward in favour of AV is that it means that no one can become an MP without winning more than 50% of the vote (assuming every voter uses all of their votes, which is a detail I'm not too fussed about). I'm not sure this is such a great thing, since some of that support might be, to say the least, grudging, coming from voters who could actually think of six or seven candidates that they would rather have had than the winner for whom their vote was finally counted.
However 50% is still 50%. And what's really great about AV is it's not only the winner who gets more than 50% of the vote, so might some of the losers.
Let's return to the constituency I mentioned in my last post, but give it a more definite result. First-choice votes go:
Labour: 15,000
Liberal: 11,000
Tory: 9,000
The Tory drops out and let's suppose 7000 of his second-choice votes were for the Liberal. The Liberal now has 18000, which is more than 50%, and wins. First-choice votes of one candidate plus second choice votes of another gives greater than 50%.
Posted by Jasper Kent at 08:36 13 comments:

As Seen on TV

TWELVE got a brief mention on the BBC's Culture Show last week. Here's the excerpt.
Posted by Jasper Kent at 14:36 1 comment:

For those of you who just can't wait, I've posted the prologue to The Third Section, the next installment of The Danilov Quintet, on my website. Read it here.
Posted by Jasper Kent at 21:09 No comments:

Will the Real Cliff Townshend Please Stand Up?

A fascinating story from the 1950s here on my father's blog concerning his landlord, who claimed to be the saxophonist Cliff Townshend, but in fact wasn't.
The story is made yet more intriguing by virtue of the fact the real Cliff Townshend was Who guitarist's Pete Townshend's father, though at the time he would he would only have been in short trousers.
Posted by Jasper Kent at 18:57 No comments: