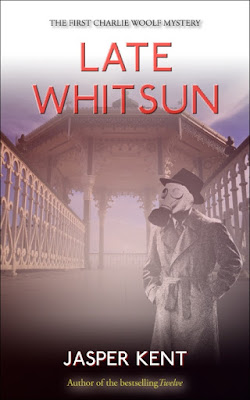 Set in Kent’s adopted hometown of Brighton, not long before the outbreak of World War II, LATE WHITSUN combines elements of Agatha Christie, Raymond Chandler and Graham Greene to produce a refreshingly new style of whodunit.

Charlie ‘Big Bad’ Woolf thought it would be easy money, and there’s precious little of that for a private detective in a seaside town. It was just a trip up to London to hand over an envelope – a favour for his old partner, Alan O’Connor. But Woolf couldn’t resist taking a peek inside.

The pictures were unadulterated smut; a man and a girl in a hotel room. Blackmail, pure and simple – right up O’Connor’s street. Woolf was happy to be rid of them, handing them over to a masked man in a London park.

When he gets home, O’Connor’s waiting for him, which is a surprise. The bigger surprise is that he’s dead; a bullet through the eye. Woolf is the prime suspect, but when he discovers that the man in the photographs is a German diplomat and the blackmail is being run by MI5, things get more complicated.

It seems obvious who killed O’Connor, but Woolf soon realizes that he’s the only one who cares. With war looming, the good of the country counts for more than the arrest of a murderer. If he’s to see the killer caught, Charlie Woolf must prove that the crime has little to do with the world of espionage …

Jasper Kent was born in Worcestershire in 1968, studied Natural Sciences at Trinity Hall, Cambridge, and now lives in Hove. TWELVE, the opening book of his historical horror series THE DANILOV QUINTET was one of the bestselling debuts of the year. As well as writing novels, Jasper works as a freelance software consultant. He has also written several plays and musicals.

In addition to other projects, Jasper is planning two more Charlie Woolf novels: THE STALACTITE MAN and TO MUDDY DEATH.

To find out more, visit www.jasperkent.com.

‘An accomplished, entertaining blend of historical fiction and dark fantasy.’ – THE TIMES

‘You will love Jasper Kent for all eternity. I sure do.’ – ELITIST BOOK REVIEWS


Jasper Kent is available for interview.

info@jasperkent.com
Posted by Jasper Kent at 11:18