The Wicker Man – The Final Cut 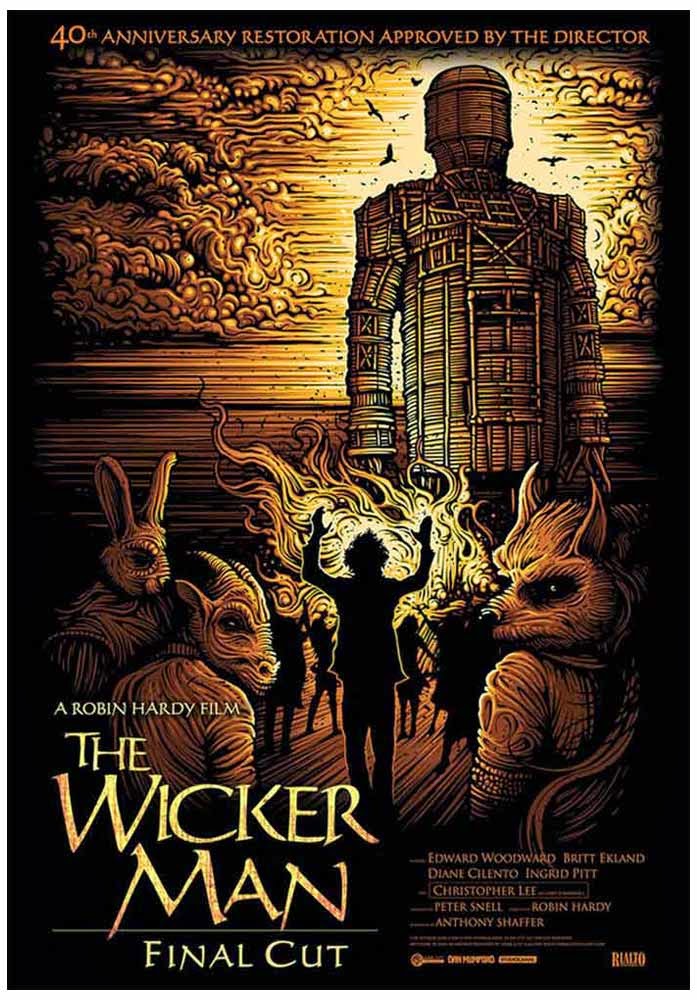 Like Psycho and The Planet of the Apes, The Wicker Man is a film for which I cannot remember not knowing the twist.

In the case of those two it’s conceivable that there really never was such a time; the films are so well entrenched in popular culture that I may have known what happens at the end even before I saw them. I doubt the same is true of The Wicker Man. I’d never even heard of it before I first saw it. I must simply have forgotten the experience of discovering for the first time the climax of Sergeant Howie’s visit to Summerisle. That’s a shame, because it’s quite a surprise … and for the benefit of the handful of people who’ve not seen the film I won’t reveal it here.

I first saw The Wicker Man late at night on the BBC sometime in the late 70s or early 80s. This version would have been the theatrical release. By all accounts it was a rushed edit done by a production company that had little confidence in the success of the movie. That said it’s still an extraordinary film and is the version that has primarily given The Wicker Man its reputation and following. 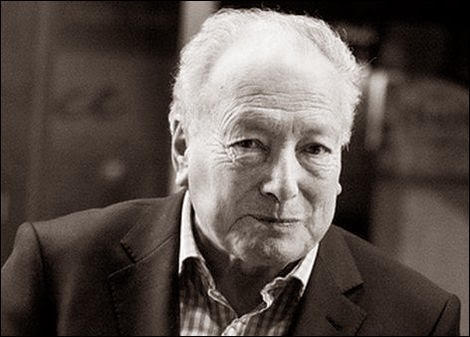 In 2002 The Director’s Cut was released; director Robin Hardy made use of unused footage to produce something closer to his original vision. It’s a full fifteen minutes longer. I think I’ve only ever watched this DVD once for the tangential reason that it has no subtitles. My girlfriend is deaf and so our frequent viewings (and believe me, we watch it a lot) have been confined to a DVD of the theatrical release that came free with The Guardian one weekend – but which did have subtitles.

Last year marked the 40th anniversary of the film and saw the release of a new DVD containing three versions of the movie - the theatrical release, the director’s cut and a new ‘final’ cut – along with some documentaries, a CD of Paul Giovanni’s amazing music and even a flyer urging us to get the sheet music for the soundtrack (duly acquired). And it has subtitles.

Recently we watched all three versions back-to-back, and so I thought I’d share my thoughts on the differences. 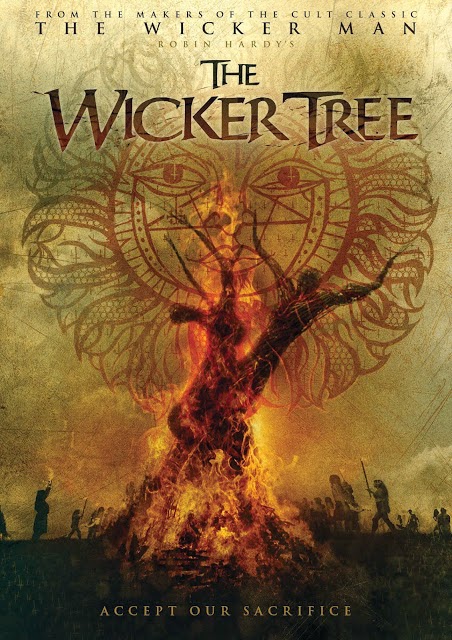 The director’s cut is the longest at 99 minutes. While one might have an instinct to regard any director’s cut as definitive that’s certainly not the same as saying it’s the best. On the one hand Robin Hardy is clearly a great director because he directed The Wicker Man . On the other hand he wrote and directed The Wicker Tree, which I found to be actually worse than the US remake of The Wicker Man starring Nicholas Cage – harsh words I know, but I stand by them.

One gets the impression that the director’s cut has tried to use every inch of footage that could be found. In many cases just a few seconds are added to the beginning or end of a scene. I’d have to question whether there really was any benefit in putting these back in, but equally I can see no reason for taking them out in the first place. In terms of the director’s cut as a film in its own right, however, there is the problem that the quality of the inserted clips is much lower than that of the theatrical release, so they do rather stand out. In a sense that’s an advantage in that it makes it easier to spot the differences. The final cut doesn’t obsess quite so much on restoring every last second and also has better quality restoration, so the extra material is less obvious – but not invisible.

The two major differences between the various versions come in the film’s opening and in the events of the two nights that Howie stays at the Green Man Inn.

The theatrical release opens with the titles showing over Sergeant Howie’s flight from the mainland to Summerisle, accompanied by Paul Giovanni’s eerie adaptation of The Highland Widow’s Lament, seguing into Corn Rigs . The director’s cut begins with quite a long section on the mainland revealing Howie’s religiosity and virginity and presenting the story of the arrival of the letter summoning him to Summerisle. The final cut has a very short sequence showing Howie in church, before going into the titles. One gets the feeling that both the later cuts are somewhat restricted by the fact that the only print available has the titles over the flight to Summerisle and that the option of completely putting them elsewhere is not available.

With regards to the opening I have to say that the theatrical release wins hands down. This is a film about a clash of cultures and therefore it should begin with the point at which those cultures meet. We know as little about Howie (aside for our preconceptions based on his uniform) as we do about the islanders. Placing all the action on Summerisle conforms to the idea of Aristotelian unity of place.  Almost all of what is covered in the director’s cut (which reminded me of a dull episode of Z-Cars) is dealt with in seconds by Howie saying he is looking for Rowan Morrison and showing the islanders the letter and the photograph. His religious life is dealt with neatly in flashback. 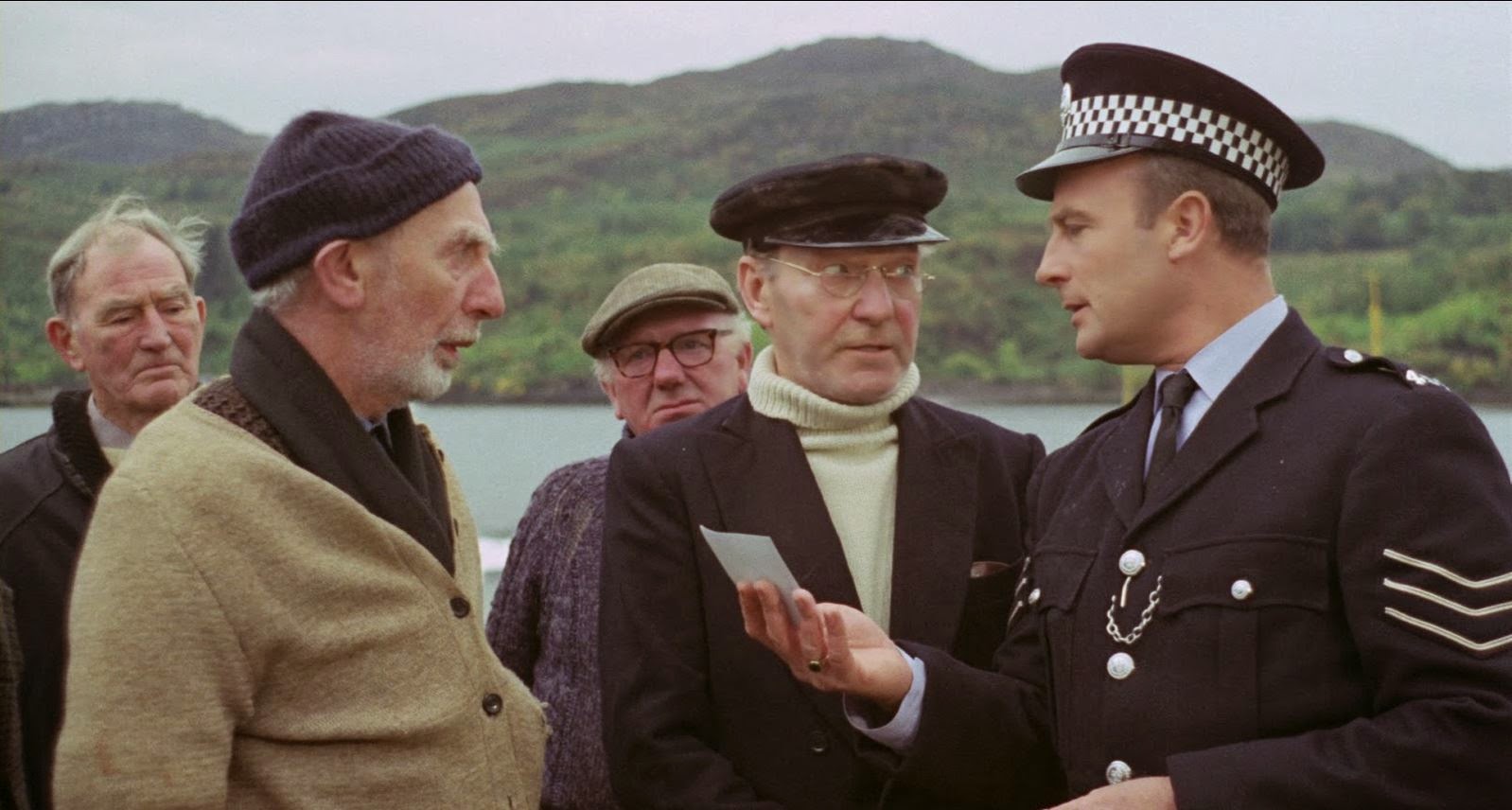 The final cut appreciates that most of the setup is unnecessary, but still puts in a very brief sequence of Howie in church on the mainland before going into the standard titles. It’s a compromise and an unnecessary one. The theatrical release gets it right: it hits us straight away with the visual spectacle of the view from the seaplane, the sound of the traditional folksong and the concept of a policeman going somewhere to do something. Anything before that is mere distraction.

The nights at the Green Man change quite substantially. In the theatrical release Willow tempts Howie on his first night at the inn and nothing much happens on the second night. In the other two versions the temptation occurs on the second night. The first night covers probably the biggest cut from the theatrical release. Lord Summerisle stands outside the inn and presents a young man to Willow to achieve his manhood with her. While they are together Lord Summerisle outside recites a speech beginning ‘I think I could turn and live with animals’, based on a poem by Walt Whitman, and there are strange, symbolic shots of a snail on a leaf. 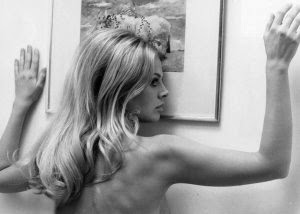 Clearly this is an important scene, both in establishing the sexual permissiveness of the island in general and of Willow in particular, and of showing Lord Summerisle as completely integrated with that aspect of the island’s life. However, I think its inclusion is a mistake.

In the theatrical release Howie (and the audience) first meets Lord Summerisle after this first night. Summerisle seems modern, affable and tolerant. In contrast with Howie he appears to be by far the more reasonable man. This doesn’t work if we the audience already know just how weird he really is. As the film progresses Summerisle still stands out as a beacon of sanity – as someone who indulges the island’s religion to just the extent that on the mainland he might indulge Christianity without having any real conviction for it. It’s only at the end, after Howie appeals to him, that we discover that he genuinely believes.

A compromise might have been to swap the events of the two nights, so that we still get to initially see Lord Summerisle as a reasonable man. I can’t say whether that was considered, but I doubt whether it would have been achievable with the available footage. Even so, it would spoil the track of our appreciation of Summerisle’s character as the film progresses.

One minor scene is interesting. Only in the director’s cut does Howie seek out the island’s doctor and ask about the death of Rowan Morrison. It is the doctor who refers him to the Public Records Office. It’s a very short scene, but it makes sense in that the doctor is the person a police sergeant would ask. I’m surprised it wasn’t included in the final cut. 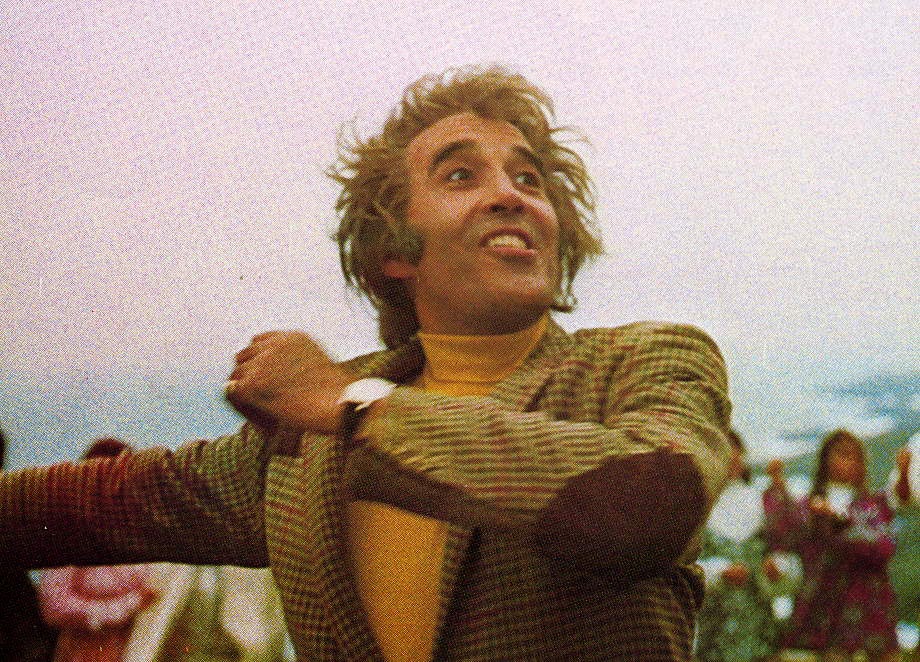 There’s one area in which I’ve always expected to see more footage and never have in any version. On the morning of Mayday Howie conducts a house-to-house search for Rowan. This has always seemed a little rushed to me and looks as though it’s been cut down from a longer (quite conceivably too long) sequence. To site a particular event, there is a point where Howie goes into a bedroom, pulls back a curtain and reveals a stone spiral staircase leading down. It seems obvious he will go down there to continue his search, but in the theatrical release he does not. It’s always bothered me and so when I first saw the director’s cut I expected to see what was down there, but the scene is just the same, as it is in the final cut. I can only presume that footage of him going down the steps is unavailable, but I’d have to question why none of the versions have thought to cut the spiral staircase completely and not leave this issue hanging.

That said I do think the search sequence (with only very slight differences across the versions) works and needs to be as pacey as it is – it just does have the feeling that it was cut down from something less slick rather than having originally been written and directed in its current form.

In the end the only significant differences across the three edits are the pre-title sequence and Lord Summerisle’s speech outside the Green Man. The story is that British Lion was not keen to release the film at all and did the edit for the theatrical release simply to have something that they could distribute. That may be true, but it doesn’t necessarily mean they made a bad job of it.

The opening of the film seems to me unquestionably best in the theatrical release. The scene on the first night is more debatable, but overall I think the story flows better without it.

I’ve watched The Wicker Man many times and I will again in future. And for variety I will probably watch all the versions. But the one I’ll watch most – the one I’d recommend – is the theatrical release.